Throw in some antique trucks, tractors, a covered wagon, an Indian motorcycle, full size steam locomotives, vintage coaches and an extensive model trains layout and you’ll begin to see how much we have going on in the ever-changing exhibits in the Durango D&SNG Museum!

In Durango, tucked in the back of the rail yard, you’ll discover the 12,000-square-foot D&SNG Railroad Museum. The Museum was created in 1998 utilizing 8 stalls of the ‘new’ 15-stall roundhouse built in 1989. It is the only narrow gauge roundhouse built in the 20th century and was built after the tragic roundhouse fire of February 1989. The silver lining when the 188 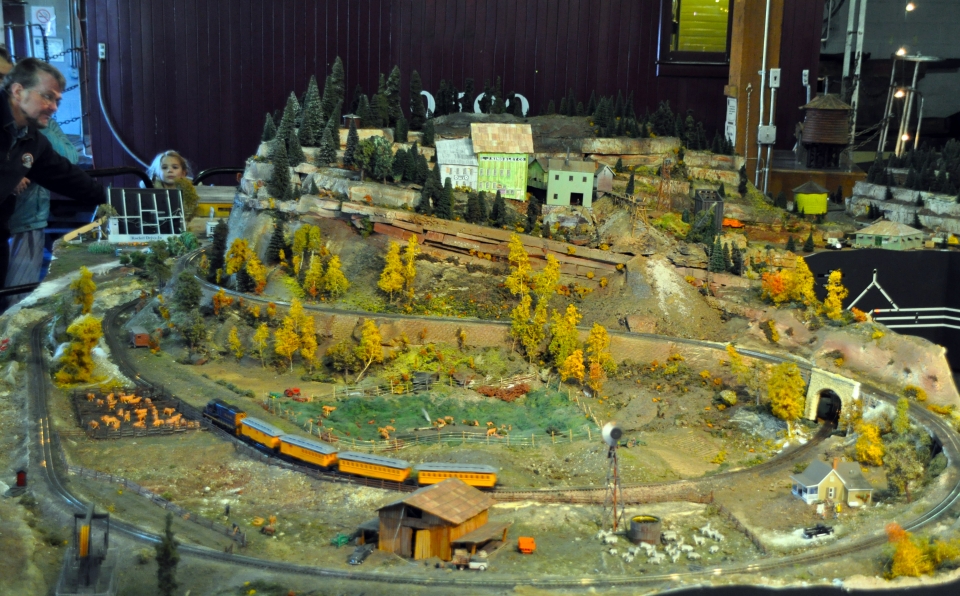 1 roundhouse burned was the opportunity to build an all-new facility with modern lighting, heat, and machine shop. The larger structure allowed the chance to open a Museum to share railroad memories with the world. Many families and old railroad workers have donated or provided artifacts that tell the history of railroading, especially on the D&RGW line.  An 800-square-foot model railroad was donated as a shell and brought to life by thousands of volunteer hours to depict the 1950s operations of the Denver & Rio Grande Western Railroad including trains passing a Drive-In theater!

The museum staff is knowledgeable in the history and current affairs of the local railroad. With a large selection of railroad history books, the staff is available as a great resource to help you find more information. Permanent displays include lanterns, locks & keys, photographs, paintings and many of

the tools of railroading. Steam locomotives, railroad cars and other equipment dating back to the 1880s are available to see up-close.  Adults and kids alike will enjoy the chance to explore the cab of a locomotive, see the view from the fireman and engineer’s seats, and handle the levers and gauges they have only seen from afar. A baggage car used in the1969 movie “Butch Cassidy and the Sundance Kid” is now a movie theatre. Business car B-7, built in 1880 and beautifully restored in 2001 as the owners’ private family car, is usually on display to see what it was like to travel the rails in the 19th century. The Museum is the terminus of the Polar Express train and for a couple of weeks is also the home of Durango’s Community Connections Inc.’s annual fundraiser “Festival of Trees”.

Pre-arranged, guided tours are offered during business hours and introduce many school-age children to the story of railroading in Durango. 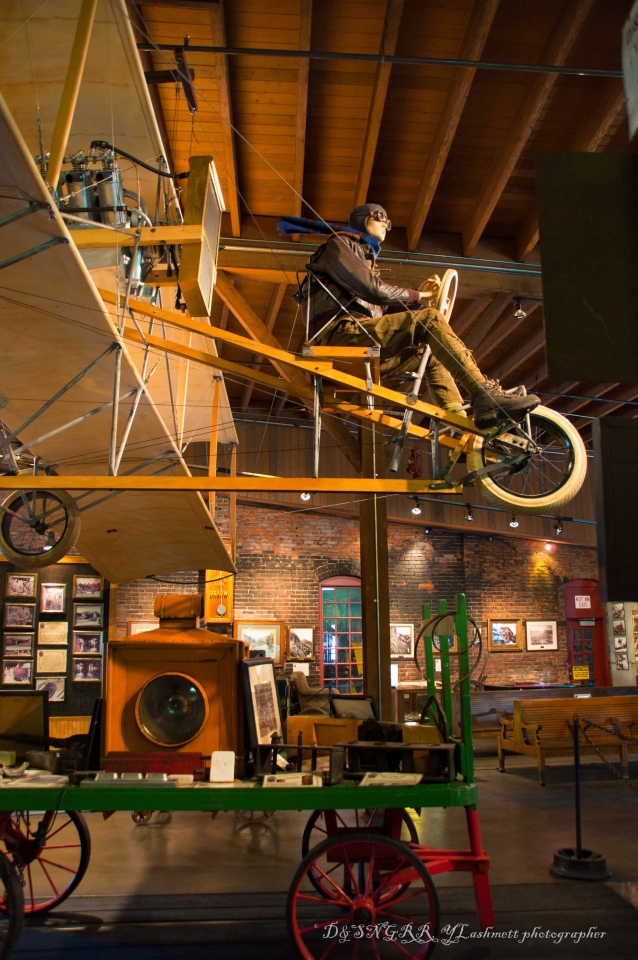 The Colorado and New Mew Mexico fair was a big event in Durango in 1913. The folks on the planning committee had big plans to make that year’s fair extra special by getting an airplane to be the main attraction. That is exactly what happened with the help of the Denver & Rio Grande Railroad. Airplanes of that era could not fly very far and had to be transported from town to town by rail. In September 1913 a Curtiss Headless Pusher Model “D” Aircraft arrived on a flat car in a crate brought to Durango by the D&RGRR. After the Airplane was assembled at Durango’s Fair Grounds, the flyer, Mr. McMillen, took off for the first time. As soon as the plane lifted off the ground it set a record for altitude because no plane had ever flown at 6512 feet before.  McMillen added another 1000 feet to that while he made many flights in the four days he flew at the fair. Read more about it here from an article in the Smithsonian’s AirSpace Magazine.
D&SNG owner Al Harper wanted to acknowledge the 100th anniversary of that flyover at the 1913 Colorado-New Mexico fair, held in Durango that September. He commissioned local sculptor Dave Claussen to recreate the Curtiss Headless Pusher Model “D” Aircraft. It was hung in the D&SNG Museum in April 2013 for all to see. Read more about Dave Claussen here. 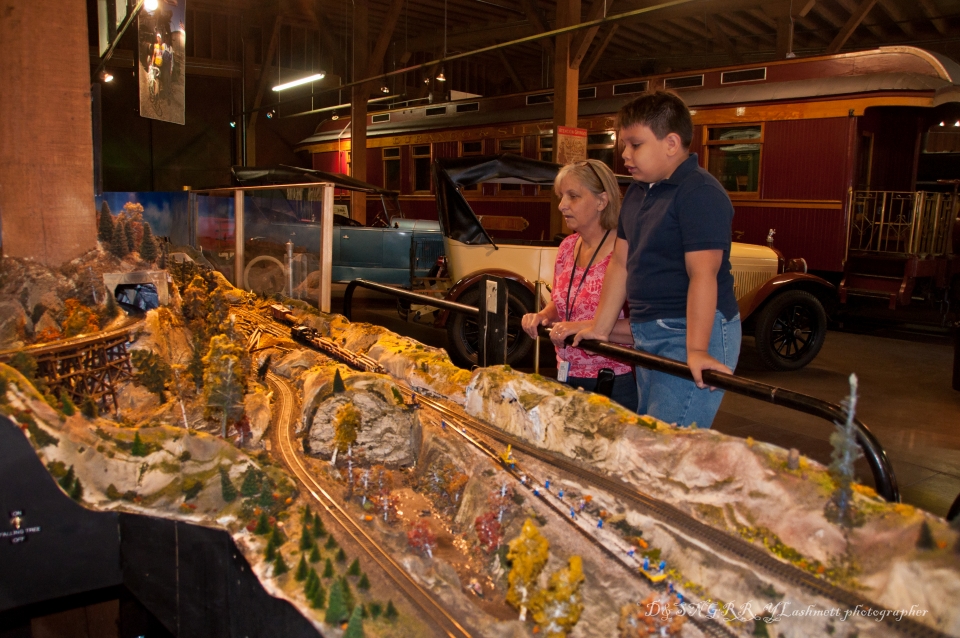 Be sure to ask about our behind-the-scenes tours of the Durango yard and shops!
Click here to go to our Yard Tour page!

Here is what some visitors wrote on Trip Advisor:
“wonderful museum”

Reviewed September 25, 2012 NEW
I really enjoyed this museum , would highly recommend visiting! Incredible amount of items and the exhibits are very well done and really interesting. The train exhibit is wonderful and great place for kids as well! People come from around the world to ride this train!

“Free Museum is fun for train lovers as well as casual tourists” Reviewed August 24, 2011. Visited August 2011 from Dallas, Texas: We didn’t go on the train ride as we took a driving tour of the the San Juan Loop instead, but the museum was a wonderful slice of history. Not only is there info on the various trains/railways in the area, but the working round table is fun to watch in action. The museum has artifacts from the past, maps, mini train displays, full size train displays, newspapers, and more. …It was definitely worth a stop to see.

“Its a must to do when you are in Durango” Reviewed March 24, 2012 by visitors from Bordeaux, France: Well kept and a wealth of information and activities to keep children and adults alike happy and occupied.

If you enjoy history, please visit other Museums in the Durango area:

Be sure to visit the Animas Museum!  www.animasmuseum.org  Show your D&S train ticket to receive $1.00 off Adult Admission, $.50 off child admission and  $5.00 off an annual Membership!

We are fully open for operations and our 2022 summer season is off to a wonderful and robust start. We experienced a brief pause in railroad operations over three days while we worked through communications with the Forest Service on our operating status while observing agreed upon fire precautions.  Concurrently, we were able to rebook passengers to adjacent days when train excursions were operating.
We are now operating daily and our train schedule is in fact expanding as we move deeper into the summer season.

Please know that if we experience any interruptions in service due to future fire precaution levels, we will reach out to all of our guests in a most timely manner to offer information and alternatives.
Thank you”