Locomotive 493: Conversion from Coal-Fired to Oil-Burning Arrival of Locomotive SP-18

As discussed in previous posts, the Durango & Silverton Narrow Gauge Railroad‚ Locomotive #493 is in the process of being converted from coal-fired to oil-burning at the Durango depot in Durango, Colorado. But the actual mechanical work to restore and convert this locomotive to oil fire is only one aspect of being able to successfully operate the #493 on the D&SNG line. Crew training, fueling logistics, and estimating fuel consumption are also key elements in the transition from coal to oil. For this reason, the D&S railroad has leased a historic oil-burning locomotive, the Southern Pacific 18, a T44 16/20 68 locomotive, from Eastern California Museum in Inyo County, California.

While in Durango, the SP-18 will run as a passenger-carrying locomotive on select Thursdays during the winter of 2019 as well as other dates including a special Silverton excursion.

The SP-18 is scheduled to arrive at the Durango Depot in November 2018 and will remain there until June 2019 at which time it will make the return journey back home to Inyo County. 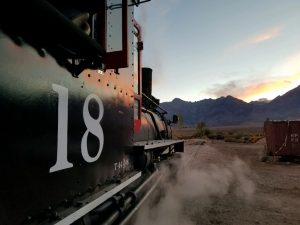 Southern Pacific #18 was built by Baldwin Locomotive Works in December 1911 (build #37395 possessing a 4-6-0 wheel arrangement). It was originally built as an oil-burning locomotive and weighs in at 46 tons.

SP-18 was commissioned by the Nevada-California-Oregon Railroad (NCO) and originally operated between Reno, Nevada, and Lakeview, Oregon as their locomotive #12. In 1928 it was transferred to the Southern Pacific Keeler branch which operated between Keeler, CA, and Miner, Nevada as the renumbered #18 engine. It ran until 1954, at which time it along with 2 sister engines were replaced by a narrow-gauge diesel engine. No. 18 was officially retired in October 1954 and it was moved to Dehy Park in Independence California, the seat of Inyo County, where it remained for the next 63 years. 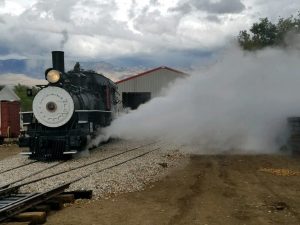 About the restoration of SP-18

The Carson and Colorado RY 501c3, named after the railroad that constructed the Keeler branch in 1881, was formed in 1998 with the intent to preserve #18. After several years of inactivity, restoration began in 2010 by a dedicated volunteer base from a number of tourist railroads including five regular volunteers from the D&SNGRR. The locomotive restoration included everything from the boiler and tender to the wheels and everything in between. In 2016, after 10,000 hours of volunteer labor, most of the work was completed and SP-18 was moved three blocks from Dehy Park to Eastern California Museum, where it was placed in a custom-built engine house. The total cost of this historic engine restoration was around $170,000. 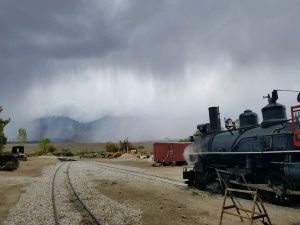