The Durango and Silverton Narrow Gauge Railroad touches the senses in different ways. Some ride because of the spectacular scenery deep within the rugged San Juan Mountains, and for the breathtaking views along the Animas River. Others ride because of the steam locomotives that lead passengers on their journey through time, bringing with it its own rhythm and song that resonates off the mountains. Maintaining these steam giants is an exhaustive task handled by the D&SNG roundhouse staff. The challenge of keeping a fleet of steam engines in top shape mounts with each passing year as unique materials, special lubricants, and obsolete parts all present challenges to keeping them going strong.

However, without these labor-intensive giants, the D&SNG wouldn’t be the unique railroad it is; and furthermore, a steam locomotive is like a living breathing beast which continues to evolve with each passing year. 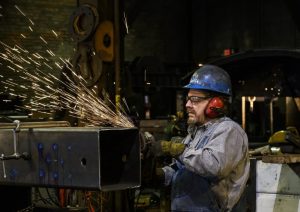 Since the first rails reached Southwestern Colorado in the summer of 1881, coal-fired steam locomotives have been a regular part of the ambiance of the region. To this day the D&SNG has the largest fleet of operational steam engines in the country at seven. The railroad stables three classes of steamers, each originally built for the Denver and Rio Grande Western RR, the D&SNG’s predecessor. Designated K-28, K-36, and K-37’s for their 2-8-2 wheel arrangement and respective pulling power these engines have seen hundreds of thousands of miles of service – K-28 #473 has never been out of service for more than routine maintenance. Sister engine #476 underwent a major rebuild in 2017 after sitting in the D&SNG museum for decades. Along with #478, currently in the D&SNG museum, these three are the last of the K-28’s in existence. Built-in 1923 for use on the Silverton branch, they are the oldest steam engines in use on the D&SNG today. The railroad also employs four K-36 engines #480, #481, #482, and #486. They were built in 1925 and are all in operation to this day. 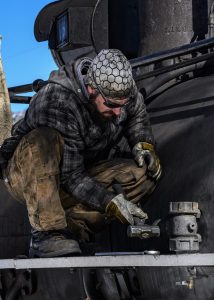 The Harper family, who have owned and operated this line for more than twenty years have always put forth the effort to expand and reinvest in their company. They strive to ensure the preservation of history, but in a way that will be sustainable for years to come. Though they continue to be committed to maintaining excursions to Silverton by way of steam, that doesn’t mean all will be coal-fired. Part of expanding and growing is adapting to the world around you. Beginning in April of 2018 the conversion of locomotive #493 from coal-burning to oil-burning began. #493 is a K-37 that last saw service in July of 1968 and spent decades on display in Silverton. For its coal-burning engines, the railroad will continue to get its coal from the King Coal Mine, located in La Plata County, as it has for roughly 60 years. The fuel oil to be used is recycled oil and will also be sourced locally. Since oil-burning locomotives are unchartered territory on the D&SNG, the railroad had to find a way to educate its staff on their unique features. What better way to learn than with hands-on experience? 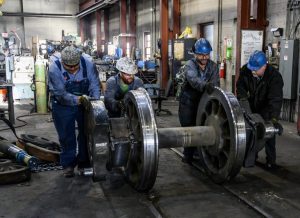 Welcome the Southern Pacific #18, an oil-burning locomotive that has resided in a small Eastern California town of Independence, situated in the shadow of the Sierra Nevada Mountains. The #18 is a 4-6-0 locomotive that was built in 1911 and used to service the mine regions in the deserts of Nevada and California. In 1954 the #18 was retired and placed on display in Independence’s town park until a group of volunteers from the Carson & Colorado Railway began the task of restoring this “Slim Princess” into the beauty she is today – this nickname was given to the #18 by those that lived along the route it once operated, referencing its narrow gauge. After 10,000 man-hours and funding from donations, the #18 restoration was completed in 2016. With the #18 operational to current Federal Railway Standards, the D&SNG and CCR came to an agreement for its use to learn the nuances and details of an oil-burning locomotive. In November of 2018, the #18 arrived in Durango! Having this engine at their disposal, the D&SNG has been able to provide crucial knowledge to their crews before the #493 enters service. While at the D&SNG, #18 will be used primarily for work train service and some special excursions prior to its return to Independence, California later in 2019.

Though steam engines are certainly the backbone of the railroad and will continue to be for years to come, they are not the only locomotives that play an important role. Diesel locomotives have been on the D&SNG since 2002 when a 50 tonner, known as “Hot Shot”, was purchased. Realizing its value, two more, 87-ton #11 “PB” (princess bride), and 92-ton #7 known as “Big Al” joined the Harper’s fleet. All three locomotives were designed for lower speeds and heavier tonnage on level ground, not entirely conducive to the terrain on the D&SNG. Until recently, the use of these diesel has been mainly limited to work trains, special events, and yard switching. In 2016 the D&SNG acquired its fourth diesel, #1203 a 1947 Porter. #1203 is the first “road” unit, designed for higher speeds and pulling power. In 2018, the D&SNG contracted with Motive Power & Equipment Solutions in Greenville, South Carolina to repower and repurpose two additional diesels. These specially designed locomotives, #1201 and #1202, are equipped with more modern technology suited specifically for the D&SNG’s steep grades and sharp curves. Similar in design to modern freight locomotives, they will be used for shorter trips originating from the Rockwood station as well as select winter trips and maintenance service. To better facilitate all of the D&SNG diesel locomotives, a new 45’ X 100’ maintenance shop is slated for construction in the Durango yard.

Though the D&SNG will always strive to give its guests a one-of-a-kind steam experience, how that exactly looks will be something that is constantly reviewed. So close your eyes for a moment and listen to the locomotive at the head of your train work its way to Silverton, consider the challenges associated with keeping it on track in the 21st century. Regardless as to whether it burns fuel oil, or coal, its doing the job its builders intended, and doing it well, nearly 100 years later. Now how many of you think you will still be driving the same car you’re driving today, 100 years from now!